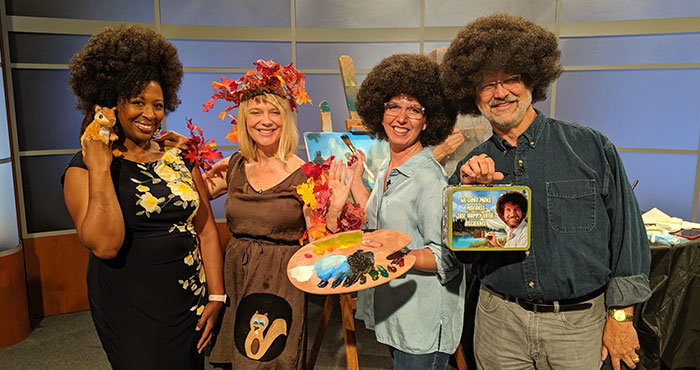 “What about Bob Ross?,” I said.
“Yes… He’s iconic, he’s revered by our traditional audiences, and younger generations love him,” our social media manager contemplated, “we could do trivia and have a giveaway box with one of those bobble heads!”
Our event coordinator chimed in, “How about a painting party… or painting on the set? Who do we know that paints? I can get wigs… we must have Bob Ross wigs!”
“OMG, I have the best idea for a cold open on our live studio night… it will be epic!,” exclaimed our director.

And from that spontaneous brainstorming meeting, our Bob Ross Campaign was born.

While we incorporated some opportunities for fundraising, the main goal was acquisition and engagement. We utilized the trivia and drawings for collecting new email addresses to build into our campaign efforts later in the year. The videos and the on-air event were primarily targeted to our traditional audience for member engagement along with the fundraising component. But both efforts crossed over. We simultaneously targeted the existing audience with trivia and encouraged our prospects to tune-in.

The components of this happy little integrated campaign included the following:

We utilized every promotional asset we had available: social media, stories, live video, pre-roll video, live-stream, website and email, paid ads, prospect ads, radio ads, interstitials, print, even a feature in the “Best of PBS” newsletter. A life-sized cardboard cutout scared the bejesus out of staff members as it mysteriously traveled from office to office. A Bob Ross selfie station was set up outside of a conference room. Afro-style wigged staff members in blue collared shirts with paint brushes and palettes were seen roaming the hallways. And during the six-weeks of planning, the Bob Ross memes flew like wildfire among our emails and phones. Oh, yeah… and I painted!

In addition to the tremendous impact of acquisition and engagement, this campaign was a team effort! And by team, I mean multiple teams! We had folks from development, marcomm, social, and events along with producers and directors from the content department.

Plus, we were overjoyed with these comments from our viewers:

And a happy little time was had by all!

Note: photos and a sizzle reel of the Bob Ross takeover night are below. Plus, enjoy some of our Bob Ross Trivia questions!

False! He maintained a perm as a cost-saving measure (and he reportedly disliked it!)

What percentage of the television audience painted along with Ross?

Only 10% of the viewing audience actually painted along with the show.

How much money did Bob Ross make from each episode of The Joy of Painting?

$0! Ross did the series for free; his income came from Bob Ross Inc.

What feature was frequently missing from Bob Ross's paintings?