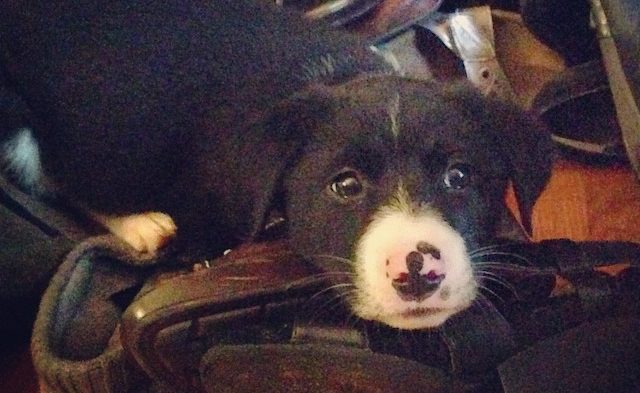 We didn’t plan on getting another dog and certainly not a puppy. But sometimes fate steps in the way and you’ve got no choice but to follow.

It started with a chance encounter of  a neighborhood friend… who happened to have a litter of puppies in need of homes… which happened to be the same mixed breed as our current dog: a Border Collie-Australian Shepherd. And then we saw the pictures. Like I said before: there was just no saying no.

We chose the last little girl of the litter, the six-toed sweetie with the black head and white nose. We call this little ball of kinetic energy Piper. She loves shoes, the stinkier the better, and likes to carry them under the deck. She’s crazy for watermelon. She likes to splash in water from the hose and chases lightening bugs. She snatches bones from her big brother Dasher even when she has one right in front of her. When she plays with her toys, she likes to roll around in your lap.

The irony of Piper rhyming with hyper and viper was not lost on us. We equate her puppy teeth to those of a baby shark. For a couple weeks my hands were adorned with puppy scratches until I discovered an ASPCA article about puppy teething and mouthing. What a lifesaver.

For the first four weeks, we had to take her out to pee at least twice in the middle of the night. And if she saw the cat, forget trying to get her back into bed.

During a two-week heatwave, she had a knack for finding crispy, dead garden snakes as snacks. At her first puppy training class, she peed three times. Last week she found gum and had sticky paws for days. And she picks up bad habits from “the big guy.”

Last weekend, my daughter and her friends took Piper with them into the woods to a little sandbar by a stream where they often play. The “beach,” as they call it, is about a mile away. Piper had never been there before. It was the fourth of July weekend and they set off some firecrackers. She got scared and took off. The kids panicked and set out on a search party to find her.

Meanwhile, I was at home and noticed Piper at the door. She was wet and had sand on her belly. Her leash, which was still attached, was soaked. I figured she was just outside playing in the kiddie pool we bought for her and didn’t think too much of it.

About 20 minutes later the kids came home. They gushed when they saw Piper and then told me the story. We were stunned… Piper remembered the mile-long route and bolted directly home.