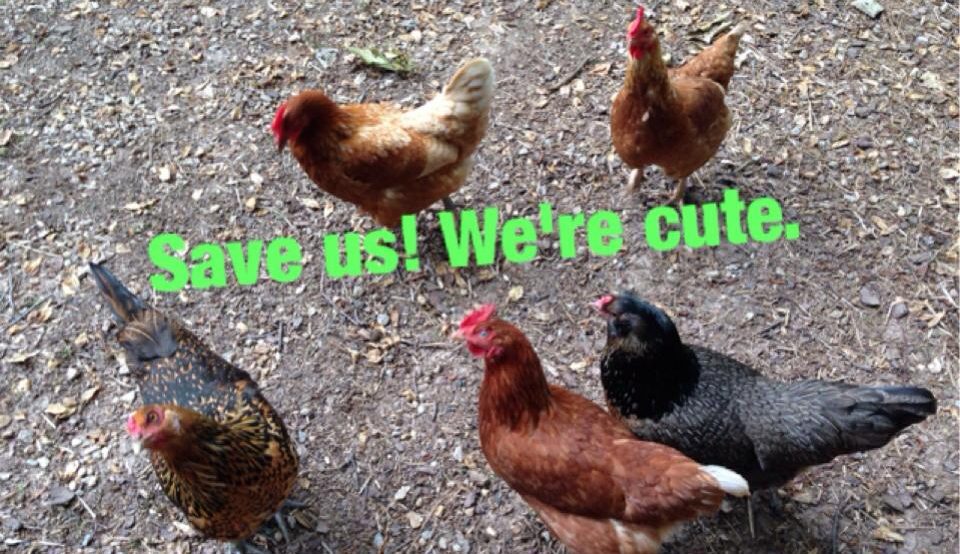 The moment my daughter spotted the crate full of fuzzy little chicks peeping happily at the local hardware store, she was smitten. Every year near Easter, the peeps appeared. And every year, she begged us to get chickens.

My daughter has a soft spot for creatures of all kinds. On a weekend get-away trip to a cabin in the mountains, she rescued a few tadpoles which we brought home and tenderly cared for until they grew into little tree frogs. On a trip to the beach, she was enamored by hermit crabs and we went through several rounds of those. Somehow at school, she became fascinated by fish and we now have a 30-gallon tank filled with an assortment of fresh water beauties. We also had a few rescued garden snakes, a couple of injured baby birds and a jar or two of lightening bugs through the years. One of the happiest memories in our family was when we managed to surprise her on Christmas Eve with a kitten. He’s now full-grown, but still sleeps with her every night.

We managed to stave off the topic of the chickens for a few years but it was finally time to get down to business. The Raleigh Tour d’Coop was gaining in popularity. Some friends in Cary shared stories of their backyard chickens at dinner parties and others in states like Oregon posted their adventures on Facebook. Even my own sister in Brooklyn, NY built a sweet little coop for her flock of four.

We told our daughter that she had to gather all the details of raising chickens: cost, food, coop recommendations, caring for chicks… the works. Which she did. And so, we brought home our little flock of six peeps.

Our daughter was great with them. By handling them nearly every day when they were just babies, they grew into docile birds that come when they’re called, follow us around when we have treats, and don’t mind (much) when we pick them up and carry them around the yard. With our sights set on joining the Tour d’Coop one day, we had a friend build a lovely coop with a french theme: the L’Hotel de Chick… featuring the “Spa Du Jour” (day spa, i.e. sandbox for dirt baths), Cuisine Gratis (free food), and the “Pe-HEN-thouse Suite” (the laying box.)

So imagine our shock when we discovered that chickens were illegal in our town of Garner! We were mortified! I immediately set to work researching a way to generate a petition to fight for our little birds.

Thank goodness the work had already been done by a local chicken advocate, Kristin Warren. She had started about 5 years ago fighting for chickens in Garner. She’d made several presentations to our City Council members, arranged tours, manned tables and started a website “Friends of Hens.”

I found her at just the right time. Garner had actually placed a moratorium on the enforcement of the law until the council could review and receive public input. So, we didn’t have to get rid of our chickens just yet!

Last night, we attended the final presentation to the City Council of the topic of backyard hens and the public hearing. Kristin and her family were there, along with a group of about 12 other hen enthusiasts. We each stood up to address the council members. This was my first time and I was quite nervous, but I shared that these were not just barnyard animals, they were our pets and a part of our family.

Two other folks shared that they chose chickens as pets because of allergies to dogs and cats. One mother shared that her doctor had recommended chickens for her autistic son. Two bright and well-spoken children addressed the council and shared their love for their pets. Kristin offered to serve as a resource for classes and education.

The council members debated. Some had received complaints of escaped birds. Some had reservations about the noise. Some just couldn’t understand how a farm animal could be a pet. Others wanted clarification on allowing roosters and other fowl besides hens.

We held our breath.

Finally, it was time to made a decision. And to our utter joy, they all voted “Aye!” We clapped and cheered. (They seemed quite surprised at our reaction!)

I went right home and shared the good news with our flock… they were legal!! Although I must say their reaction was slightly indifferent. They just wondered who had the snacks.

If you’re interested in getting a flock of chickens, I highly recommend backyardchickens.com. They have proven to be an excellent resource for us on topics of all kinds from injuries to pecking orders.

If you’re in the triangle region, check out Tour D’Coop – you’ll learn loads from visiting the coops of fellow chicken owners. The event happens in the spring but they offer classes throughout the year.

Some people think we’re crazy to have chickens, but we get five delicious eggs a day. The care is minimal – just cleaning out the coop about every week or so. The poop is great fertilizer for the garden. And, they are no noisier than a dog… quite a bit quieter than most of the dogs in our neighborhood, actually. Plus, they’re funny… and great subjects for memes.